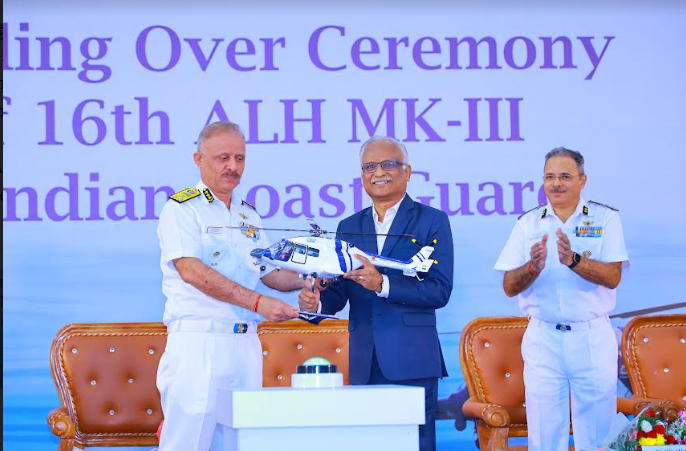 NEW DELHI: The Hindustan Aeronautics Limited (HAL) said that it has handed over the last of the 16 ALHs (Mk-III, Maritime role) contracted with the Indian Coast Guard at a programme to DG Coast Guard VS Pathania in the presence of senior officials from CG, Defence and HAL..It also got the letter of intent for nine more from the Indian Coast Guard.

“We are proud to be associated with HAL and happy to issue a Letter of Intent (LoI) for nine more helicopters. Despite COVID-19, HAL delivered all the helicopters at the shortest time with seamless production activities and this allows us to strengthen India’s Maritime security”, he said. The CG had signed a contract with HAL for supply of 16 ALH Mk III in March 2017.

C B Ananthakrishnan, CMD, HAL said a unique feature of the contract has been the Performance Based Logistics (PBL) – the one stop solution for maintenance of these helicopters by HAL. “This will serve as a benchmark for all our future contracts and boost our resolve to work with private partners to speed up the work in the interest of all our customers and strengthen Make-in-India activities in the Defence eco-system”, he added.

S Anbuvelan, CEO (Helicopter Complex), HAL in his address pointed out the major challenges in execution of the contract that included integration of new systems sourced from foreign OEMs, conducting flight trials for certifications and overcoming disruptions in the supply chain due to lock-downs.

ALH Mk III is indigenously designed, developed and produced by HAL. The company has so far produced more than 330 ALHs, a versatile helicopter which has logged more than 3.74 lakhs of flying hours.