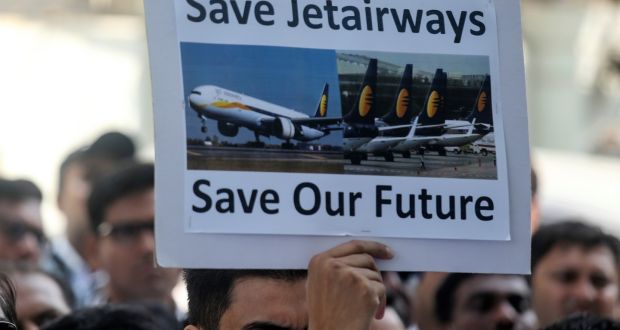 NEW DELHI: Employees of cash-strapped Jet Airways protested outside the Civil Aviation Ministry on Tuesday, demanding revival of the airline and payment of their pending salaries.

The protests come amid the struggles of State Bank of India-led consortium of lenders to find a buyer for the airline which ceased operations around mid-last month due to acute liquidity crisis.

Around 200 employees of Jet Airways demonstrated with banners reading “Hear our cry, let 9W fly”, “We fly you around, don’t let us be on ground”, “We have dependents to feed, please don’t let 9W bleed” and “A family helps each other for cleaning house”.

9W is the flight code for Jet Airways.

As the protesters moved towards the ministry, Delhi Police and CRPF personnel erected barriers to stop them.

Asish Kumar Mohanty, one of the employees who met Mishra, told PTI later, “We have given him an update about today’s conditions within Jet Airways… We have not got salaries for the last five months. In between, our medical coverage has also been stopped as the management has told us that they have no revenue.”

“We told him about three important concerns for the airline — employees’ pending salaries, no management is there now to look after Jet Airways and expedition of SBI’s bidding process,” added Mohanty, who belongs to the airline’s engineering department.

“The joint secretary said the government is very much concerned about the revival of Jet Airways. He said that the higher officers know about it and dialogue and meetings are going on. We told him that the dialogue and meetings have been going on for the last 3-4 months, but nothing has been done on paper as yet,” Mohanty said.

He said Mishra was told that aircrafts of the airline are being de-registered and the primary concern is the pending salaries of employees.

According to Mohanty, the joint secretary said he will tell his “top bosses” about the employees’ concerns.

He added that the central government would be given a petition on Tuesday itself.

The lenders, whom Jet Airways owes over Rs 8,000 crore in debt, are offering 31.2 per cent-75 per cent stake in the company on a fully diluted basis.

SBI Caps, the merchant banking arm of SBI, had on behalf of the consortium of 26 lenders invited expressions of interest between April 8-12, and received four preliminary bids.

These 26 lenders own 51 per cent stake in the airline.

After the first round of bids, private equity firms IndiGo Partners and TPG, Etihad Airways and the sovereign fund NIIF were shortlisted.

Abu Dhabi-based Etihad Airways submitted its sealed bid to acquire a minority stake in Jet Airways with a lot of riders that involved finding more investors, leaving little hope for the airline’s survival. 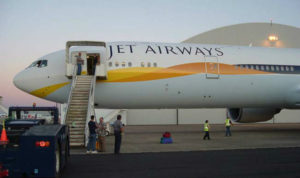